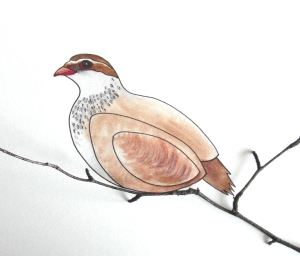 From the beginning of December I start getting all excited about Christmas. I would start the frenzy earlier, but I don’t think Mr Flora’s Patch would be able to cope with a longer Christmas fantasy world. From the 1st of December though, it’s fair game. The tree goes up (it’s a fake one because I decided when I was little that watching a tree die- even a tree all decorated and full of fairy lights- doesn’t ever make feel cheery), strings of lights appear all over the house and under the front porch in the various shapes of stars, snowflakes, flowers and colourful acorns. This last one sounds a bit random but the colours on that one are really intense, it’s beautiful. I also adorn the front door with a wreath. 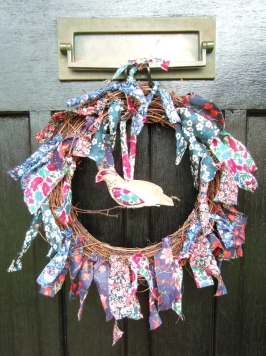 This year I made my own. The base is a willow wreath that I bought ready-made. It has a strong metal frame behind the willow that should keep the whole thing in place for years. I tore some pieces of Liberty fabric from my scrap pile, which felt like I was committing a crime. Such a beautiful fabric to just shred… But I like the untidy, fringy edges it creates. I tied these ribbon pieces randomly to the willow.

The bird is made of felt. I did some appliqué on the wings and the head markings (I took my inspiration from a partridge, because of the Christmas song “Partridge in a pear tree”), also in Liberty fabric. I painted a partridge in watercolour and copied my painting for the bird design. For the first one I used tiny black buttons for the eyes but for the second one I used teddy bear safety eyes. I stuffed the bird, which sounds macabre, and used a blanket stitch all around. Then I took my rabbit Penelope for a walk in the back garden and together we collected some sticks from the birch tree. Well, I collected, she nibbled. She really likes birch. Branch, leaves, catkins, she would eat the whole tree if I let her. And if the tree hadn’t grown to an unreasonable 25 metres high (It grew from a seed that a sparrow had pooped into a terracotta pot in the patio!).

Back to the partridge… I sewed a ribbon to the back of its neck, sewed its underbelly to a stick and secured it to the centre of the wreath. I used another ribbon directly above the hanging bird to tie the wreath to the letterbox on the front door. 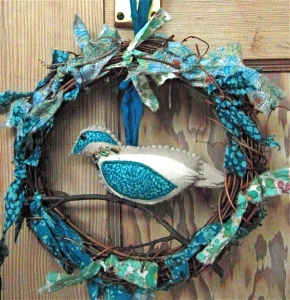 I hope you have a go at making yours. If you don’t have the time, I have listed a couple for sale in my Etsy shop here: Flora’s Patch

The first of December seems like a fine date to launch my new Etsy shop!

I would have liked to fill it more before launching but I will keep adding things on a regular basis. I am using this new platform to sell small paintings (easily sent in the post) and some of my crochet and textiles patterns and creations.

Here is a link:

Every year I choose a project and I make a thing for all my friends, in different colour variations to suit their tastes. This is the one I made last year. (I can’t blog about this year because my friends will read the blog and they’ll know what’s coming (apart from winter, but they already know that…) 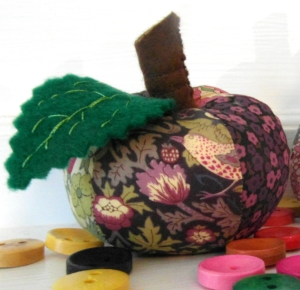 Using different variations of Liberty, Tilda and Frou Frou fabrics, I made little apple pincushions. I like pincushions. Apart from actually being useful, they can look really amazing too. Some people are very creative with them…

Of course, being a botanical artist, I couldn’t help having to make them more or less botanically correct: the leaves are serrated, the stem has two different colours for the bark and the wood core, and the veining is anastomosing… That is, I thought they were botanically correct until some clever clogs pointed out that apple skins are not usually in segments of colourful ditsy flowers. Ha! Should have seen this one coming.

Anyway, my friends seemed happy with them…

During the year I made some more and I listed them in my Etsy shop here: https://www.etsy.com/uk/listing/287237897/liberty-fabric-apple?ref=shop_home_active_9 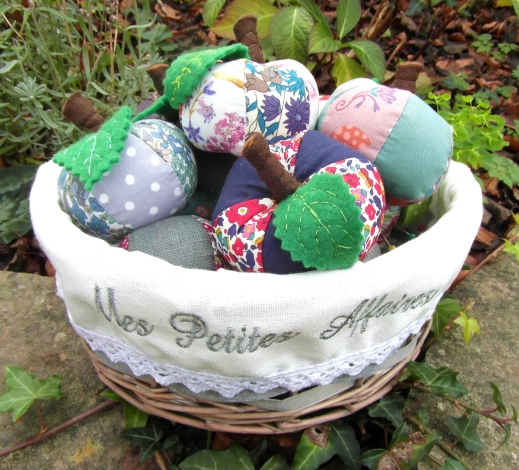 My paternal grandmother, Mémé, had a sewing machine with a treadle, a great big thing in cast iron and wooden table. She would tread away and I would sit on the floor watching the wheel go round. By the time I was 3 years old, I was “helping” with the sewing. I was far too small to reach the treadle, so I would sit on Mémé’s lap and she would operate the machinery while I was guiding the fabric and do the proper sewing bit. When Mémé died, my aunt remembered the endless sewing sessions and gave me the sewing machine. It lives in the bay window in my bedroom and still looks as impressive today, even if I can reach the treadle on my own. I don’t use it anymore but it still works and will come in very handy when we get a zombie apocalypse and we’ll have to make all our own clothes but we’ll have no electricity to operate the newer machines.